Job Openings in Canada Increase to 581,600 as Quebec Reports 70% Growth 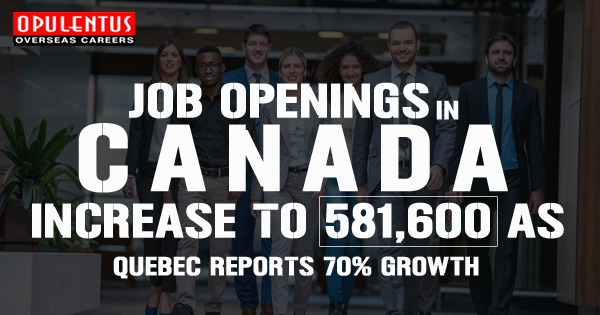 Job openings in Canada increased sharply to 581,600 in the 2nd quarter of 2019, up 6.4% in the corresponding period of the previous year, new figures reveal. Quebec estimated for approximately 70% of the Canada-wide increase of 34,800 openings, as per the Statistics Canada.

It indicates the number of Canadian job openings has now increased in each of the previous 11 quarters, in most instances outpacing the increase in employment.

Canada-wide job openings were up by higher than 75,000 in the prior quarter, with the number of job openings over 500,000 in each of the latest six quarters. Openings were also higher in six out of ten significant industrial areas.

The rise in job openings in the first and second parts of the year is a pattern recognized every year since 2015, likely reflecting seasonal patterns of recruitment.

Quebec province was at the lead, with 24,100 of the Canada-wide 34,800 boost coming in the province of French-speaking.

It means job openings have grown higher than 20% in Quebec since the corresponding time in the previous year, with the growth widespread over industries and economic regions.

Over the corresponding period, unemployment in Quebec has dropped from 5.3% to 4.9%.

Despite these numbers, the governing Coalition Avenir Quebec is driving ahead with a proposal to decrease skilled worker immigration, at a point when organizations are desperate for new workers.

Job Openings in Ontario & Other Provinces

Ontario noticed the second biggest job vacancy increase, at 7,400, or 3.6% related to the corresponding period of 2018, driven by the wholesale trade industry.

Other Canadian provinces and territories to observe increases were Newfoundland & Labrador, Nova Scotia, Yukon, and Nunavut.

Looking at job openings by industry, an increase in the second quarter of 2019 was directed by services in accommodation and food; scientific, professional, and tech services; and health care and social support.

Among the smaller areas, the number of openings progressed in forestry, agriculture, fishing, and hunting, touching the most important level for this sector since relative data became accessible in 2015.

Job openings also developed in the industries of information and cultural, mostly in broadcasting and telecommunications.