Temporary Skilled Migration Has No Impact on Jobs for Australian Workers 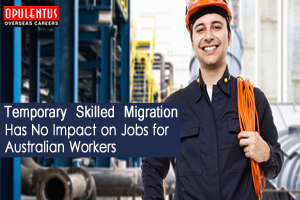 Temporary skilled migration has not reduced job openings or conditions for workers in Australia, but the revolving door political answer to international workers has frustrated firms, an industry report has seen.

The report from the Economic Development of Australia Committee (C.E.D.A), announced on 15 July 2019, told that high skilled migrants, especially those on temporary skilled work visas, have been an overwhelmingly net positive for the economy of Australia and not had any negative influence on either the pay scales or rates of participation of native workers of Australia.

Meanwhile, the report told that despite economic proof implying migration is a positive, Australian government have reacted to the concern of community with a apparent revolving door of reports, reviews, and repeated policy changes to Australian program temporary skilled migration.

The most recent policy reform was the substitution of the subclass 457 visa scheme with the new visa scheme temporary skill shortage, which is implemented from March 2018. The PM Malcolm Turnbull told the modification was meant to assure that Australians had a preference for jobs in Australia because the subclass 457 scheme had lost its reliability.

The latest visas are open for 2 to 4 years for a controlled range of professions, for which most would need mandatory labor market testing.

Melinda Cilento, C.E.D.A chief executive, told reforms like those proposed in 2017, which made it more difficult for individuals on a temporary skilled worker visa to transformation to a PR visa, could discourage the finest and talented workers  who are coming to Australia.

As per the report about 55 percent of holders of temporary skilled visa, or 520,000 individuals, transformed to a PR visa in the span of 14 years to 2014. Since 2012, higher than 50 percent of all permanent skilled visas given in Australia were to individuals, who were already residing and working in the nation below the scheme of temporary skilled.

According to the Report Less than 1 percent of the workforce in Australia is on a temporary skilled working visa, and 50 percent of those were focused on only four industries. They had a greater standard salary of approximately $95,000 per year.

The top four professions of those who were awarded visas in 2017-18 were I.C.T business analyst, developer programmer, university professor, and cook.